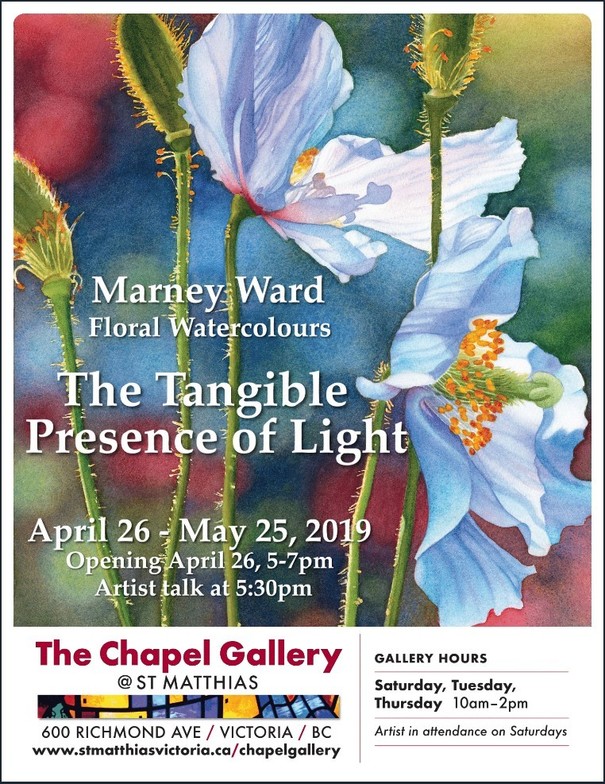 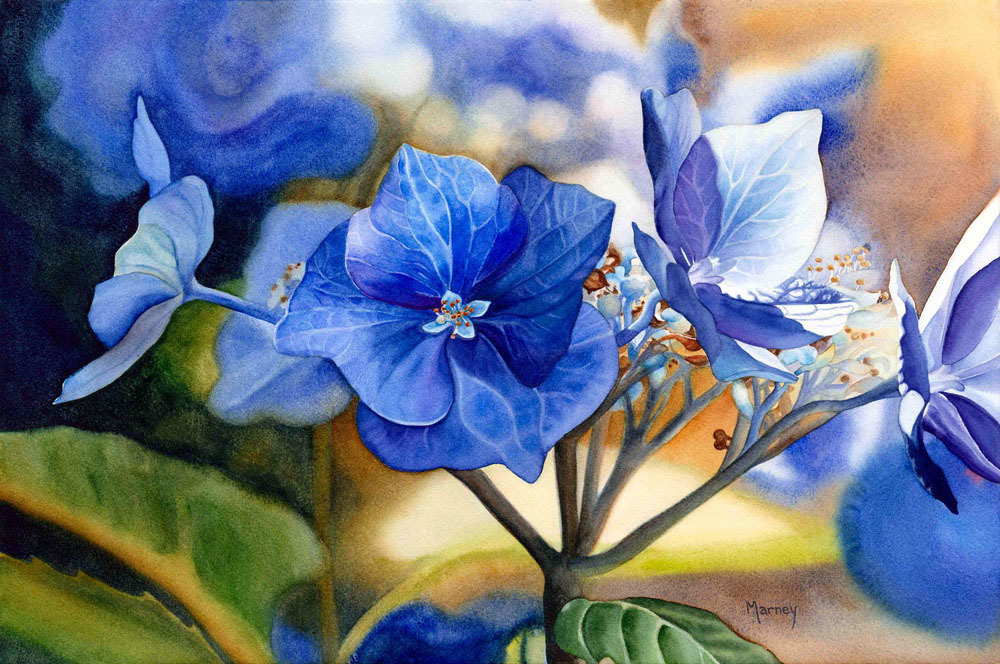 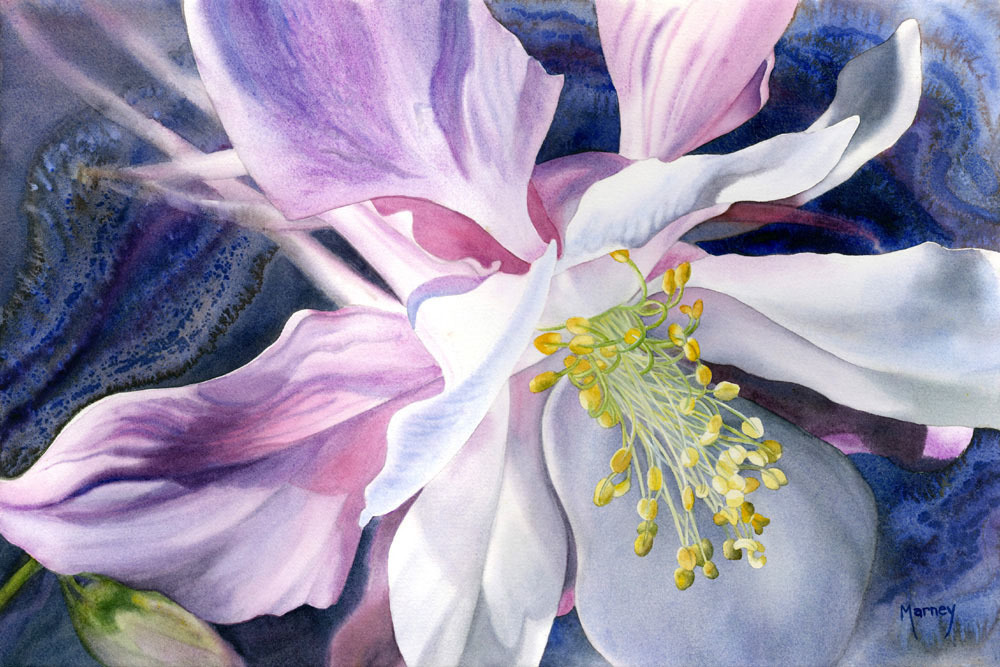 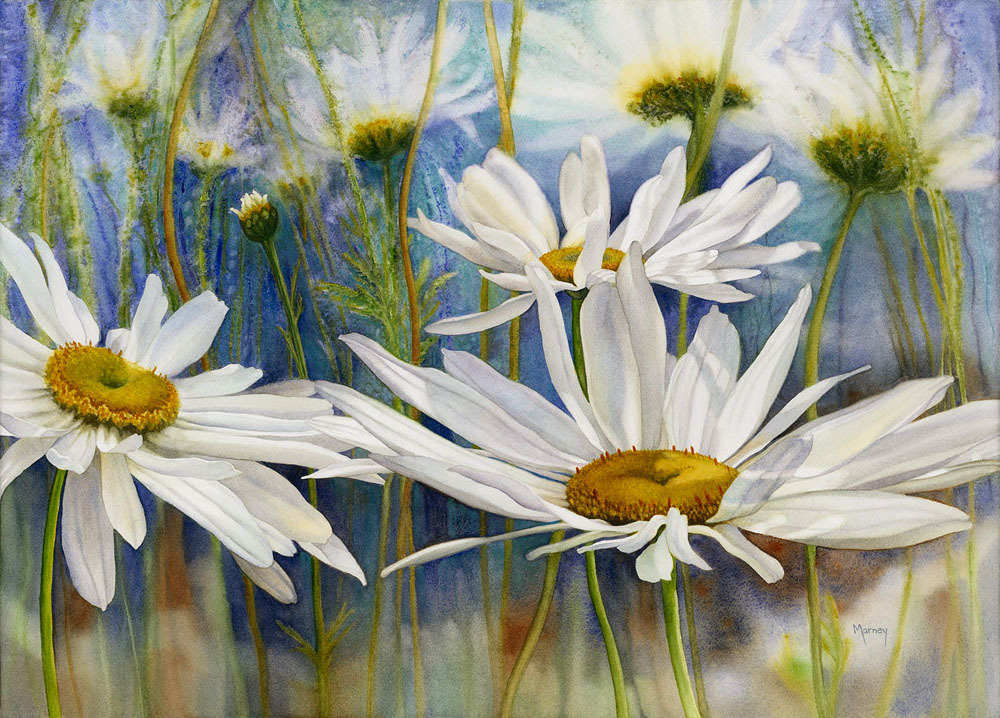 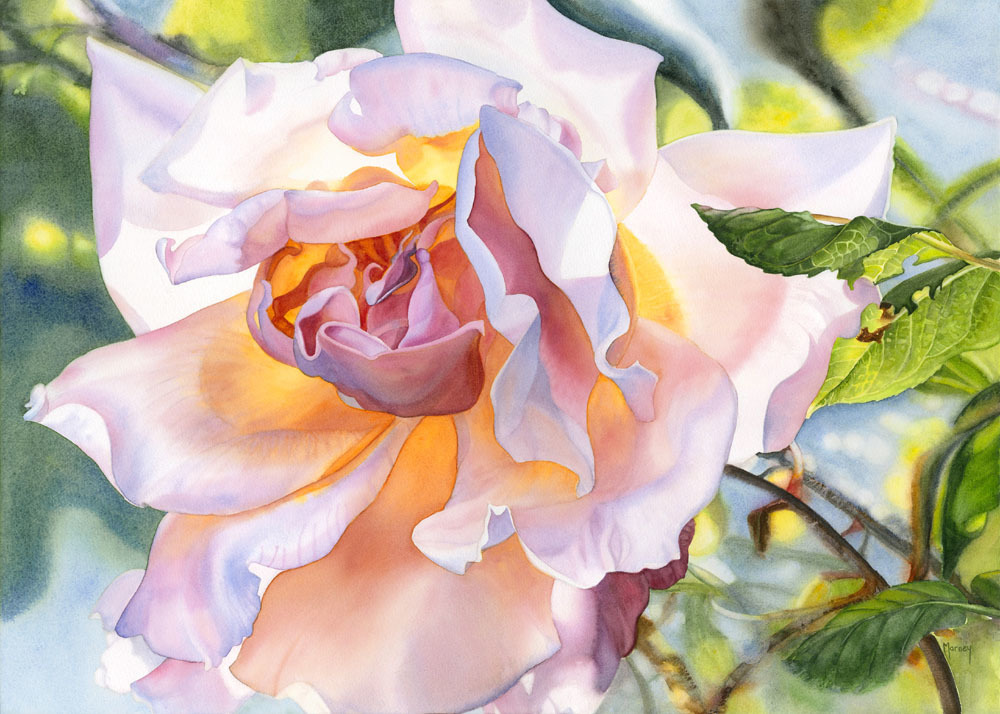 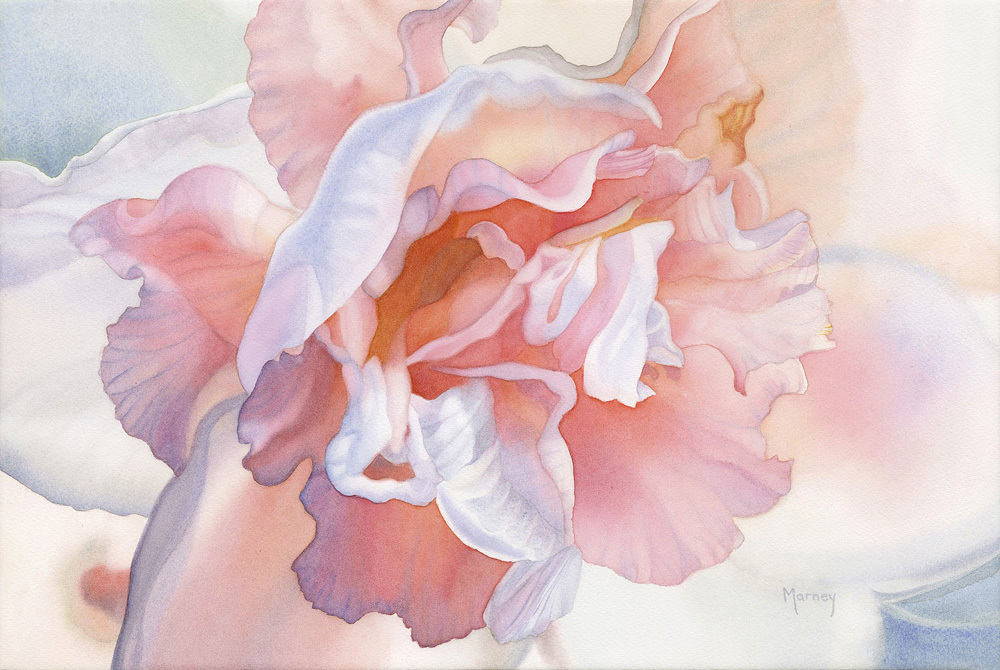 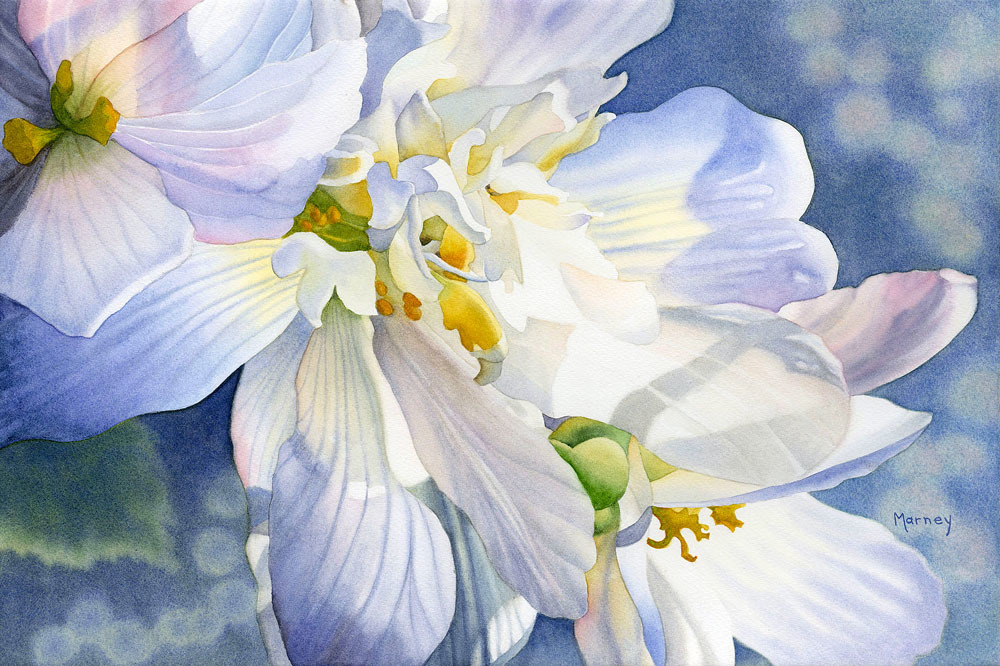 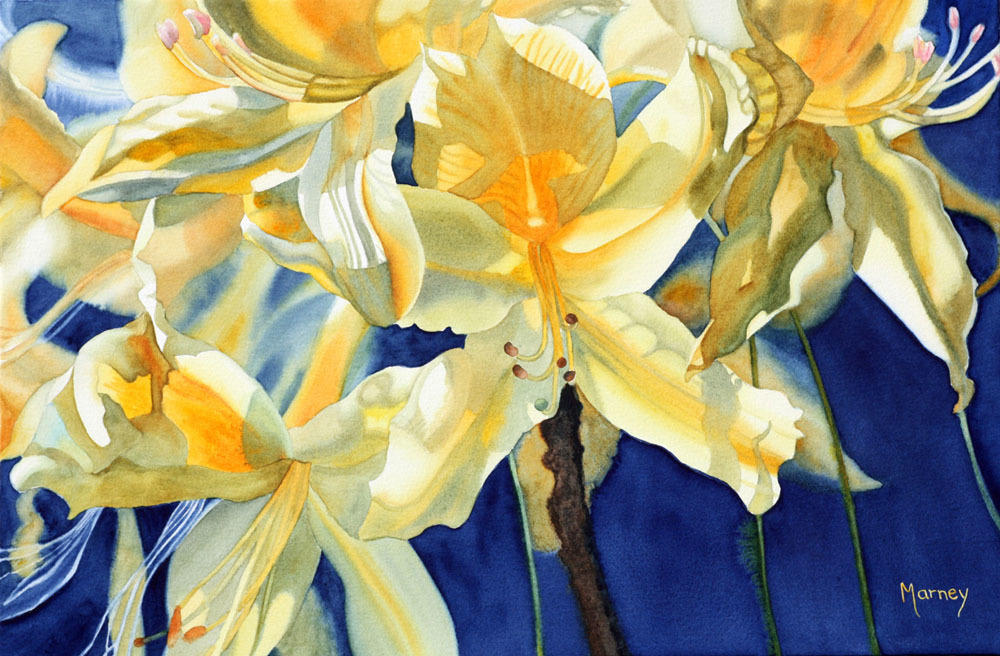 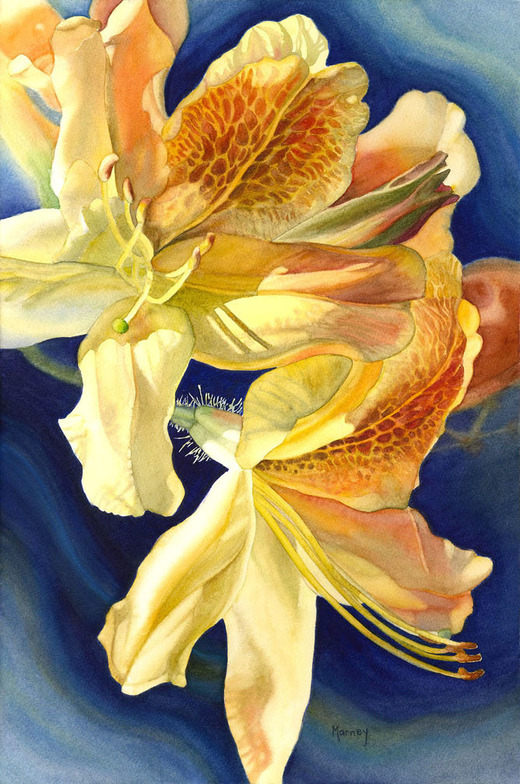 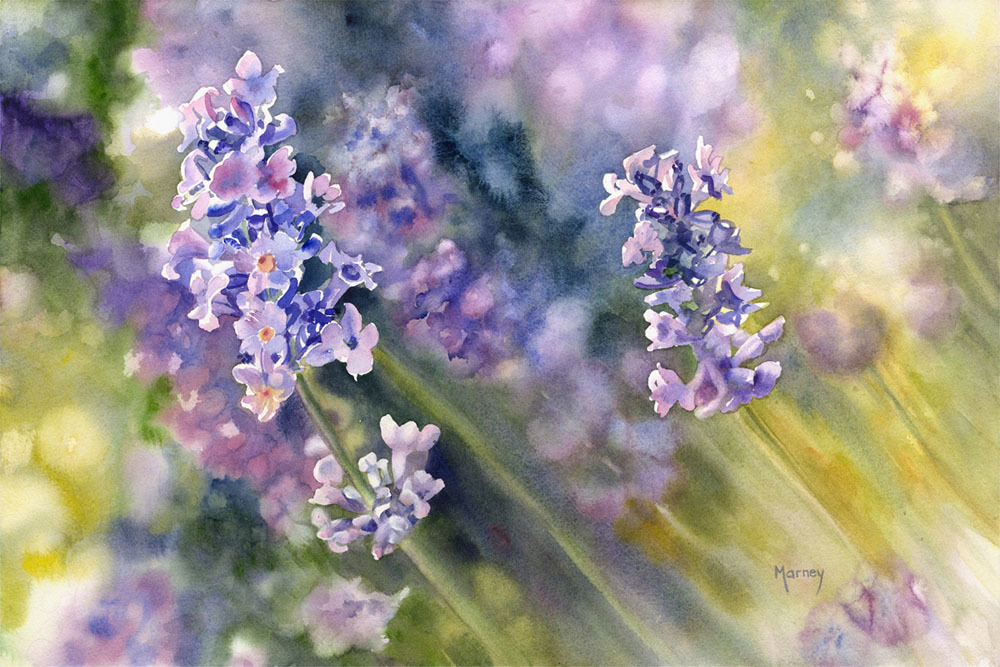 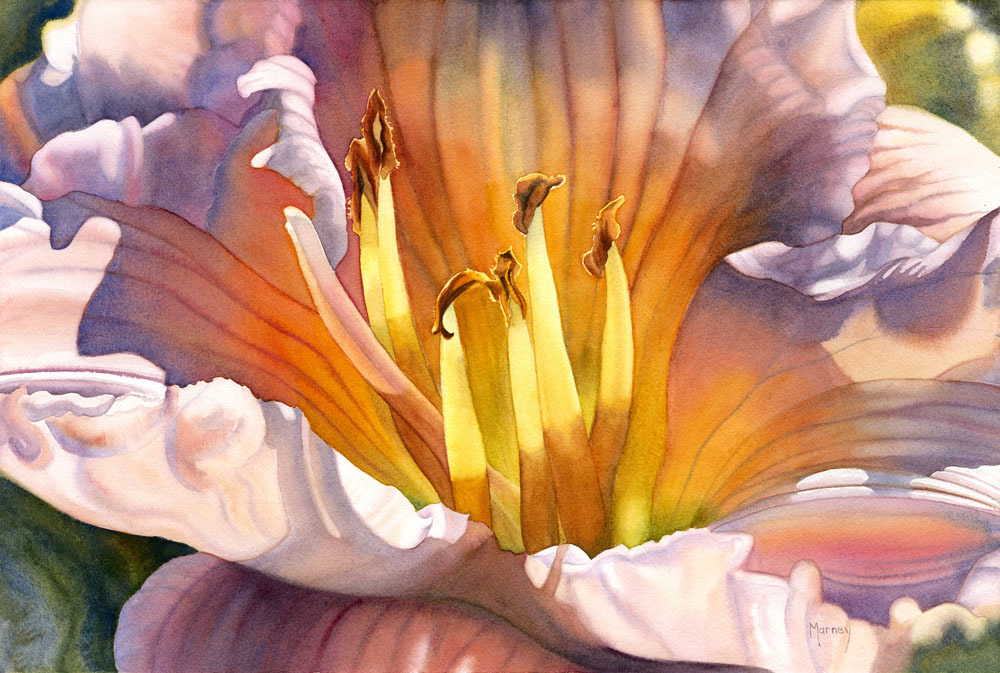 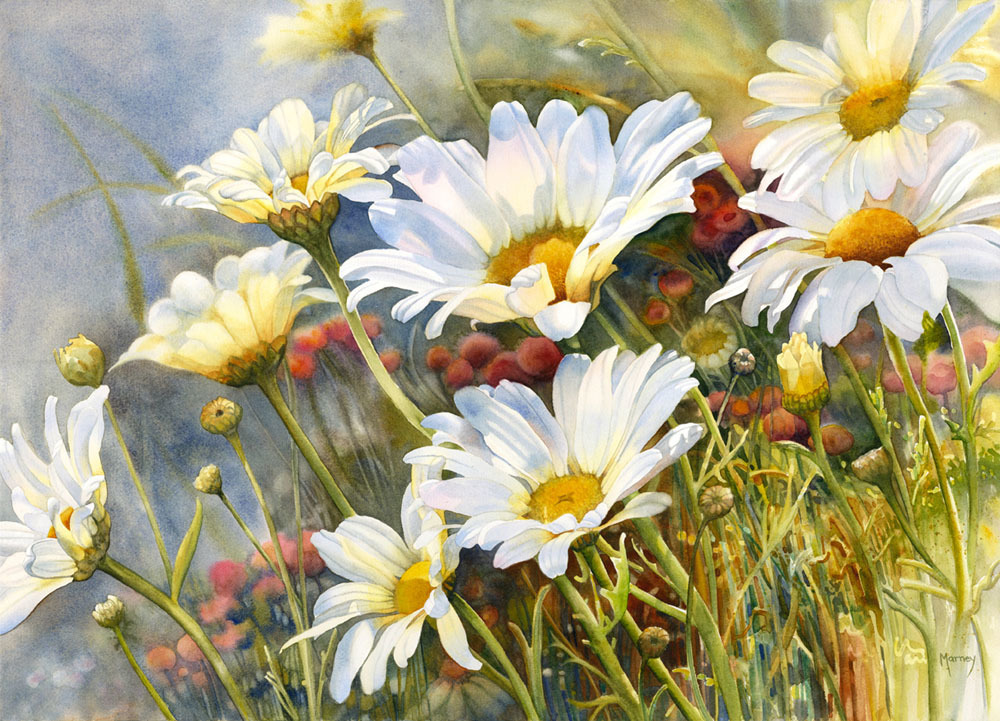 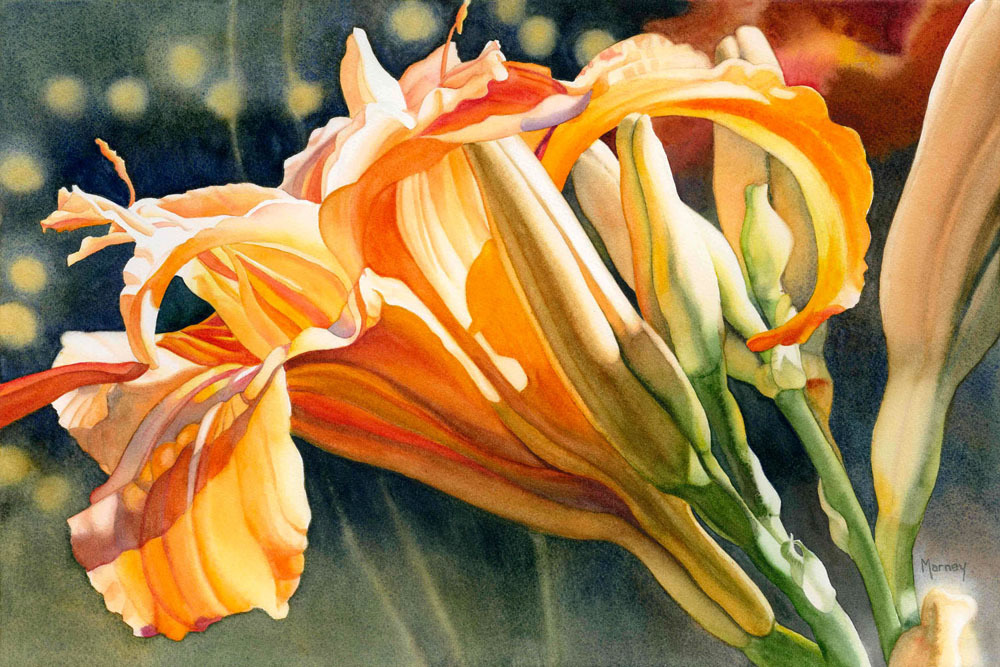 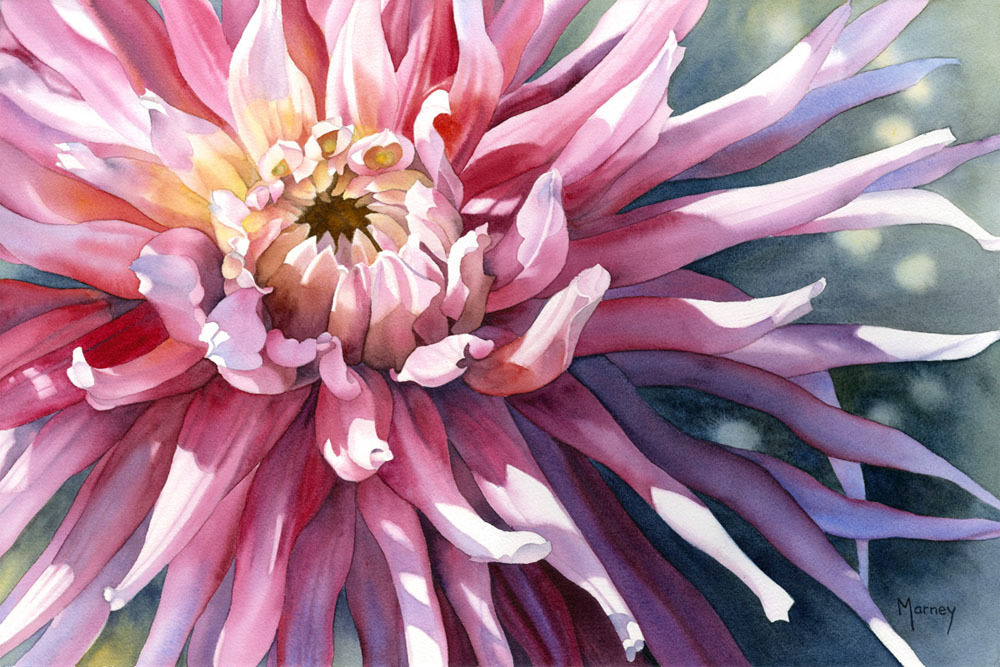 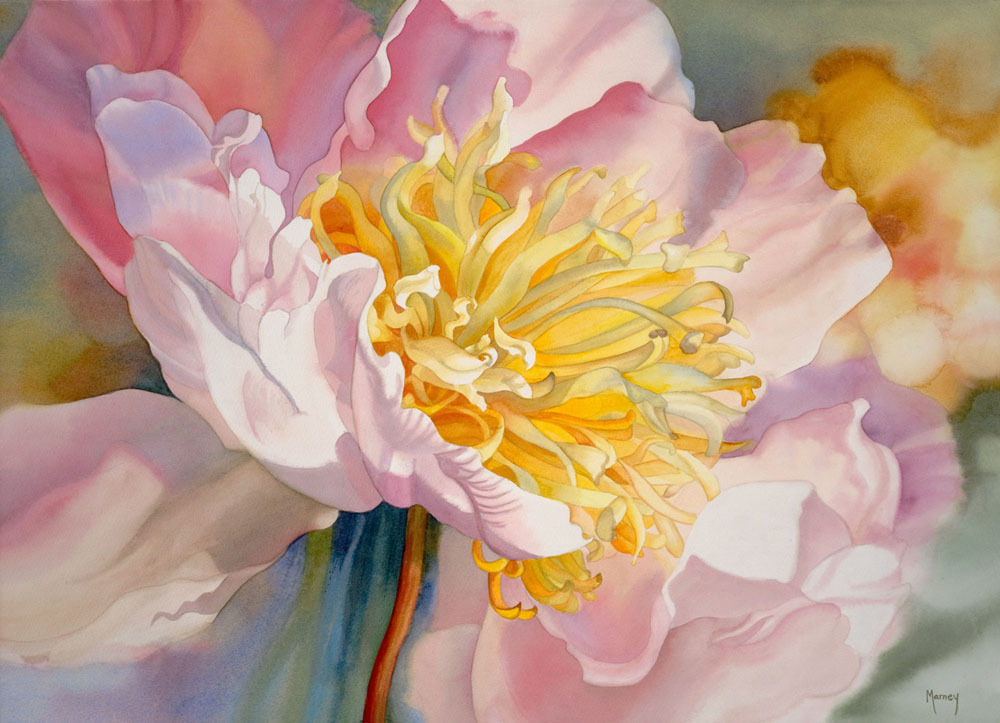 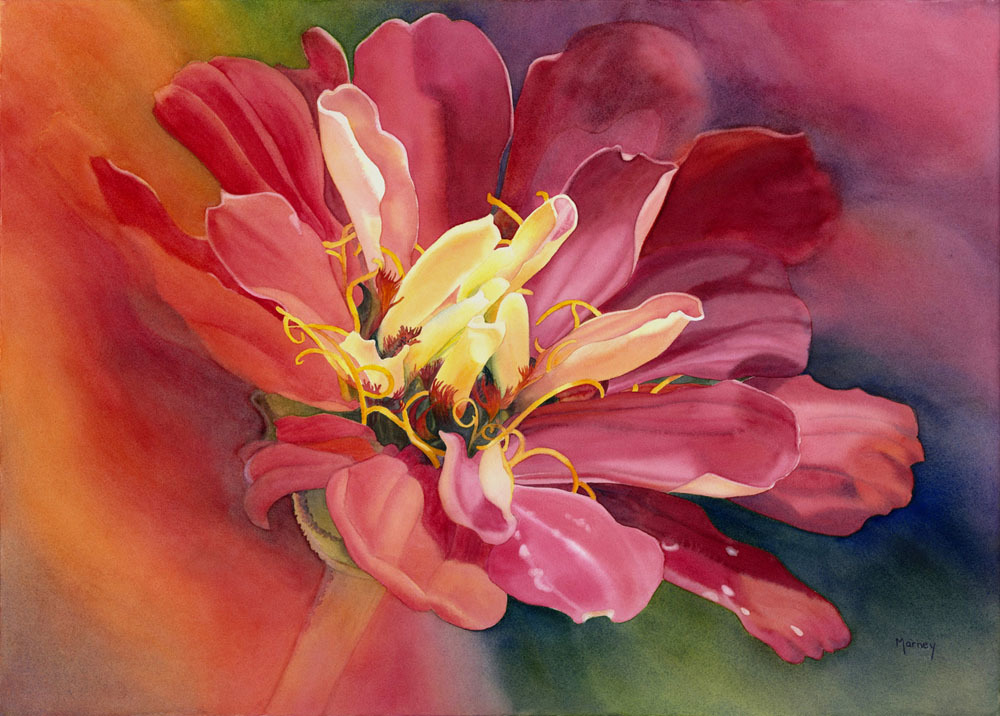 Flowers have always been a source of joy and inspiration for Marney. After studying floral watercolours with various watercolour artists, she went on to develop her own unique style: large, vibrant, back-lit close-ups that reveal the spiritual essence of the flowers she paints and beyond them, her own spiritual interconnectedness with the natural world.

For Marney, watercolour is the perfect medium, with its spontaneous flowing quality and its clear, transparent colour that allows the light of the paper to glow through. In her recent work, she plays with the unique edges and textures that are available only in watercolour. But the predominant feature of Marney’s work remains the tangible presence of light.

Marney has been interested in perception, consciousness and creativity for most of her life.

She earned a Ph.D. from UBC on the art and poetry of William Blake, then studied meditation with Maharishi Mahesh Yogi in Europe, devoting a decade to teaching Transcendental Meditation. Revisiting her first passion, art, she took classes in Chinese Brush Painting, where she learned how to better control both water and brushes. From her lifelong mentor Emily Carr, she was inspired to express the living spirit within everything she paints. Marney has taught watercolour classes for over 20 years, first through Camosun College and Artworld, then through her own home. She has recently developed a very successful, international online course.

In spring 2011 Marney was granted the highest signature status (SFCA) by the Federation of Canadian Artists (FCA). She is a past President of their Victoria Chapter, has won over 20 awards in various juried exhibitions and has served as juror for numerous shows in Victoria, Nanaimo and Vancouver.

In spring 2015 Marney was elected into signature status with the Society of Canadian Artists(SCA) and won third prize in their 47th Open Juried Exhibition in Gainsborough Galleries in Calgary, Alberta. She has since won second prize in two other major SCA exhibitions, most recently the Elected Members Exhibition in June 2018. In October 2015 she was thrilled to receive the coveted Best Work on Paper or Under Glass award in the acclaimed annual juried Sidney Fine Art Show in Sidney BC.

Marney has been featured in the French magazine Pratique des Arts, in a 4-page spread in Porcelain Artist, twice in International Artist, and in 2015 in a 12-page spread in the Australian magazine Creative Artist. She is honoured to have a major feature written about her in the May/June 2019 edition of Watercolor Artist.

Marney has had three major solo exhibitions, two with Winchester Galleries and one at The Old School House Arts Centre (TOSH) in Qualicum Beach, BC. She is excited to announce a new, upcoming solo exhibition in April and May, 2019 at Chapel Gallery, Victoria. Marney also shows at the Art Gallery of Greater Victoria, Art Rentals; Butchart Gardens; andFederation Galleryin Vancouver.