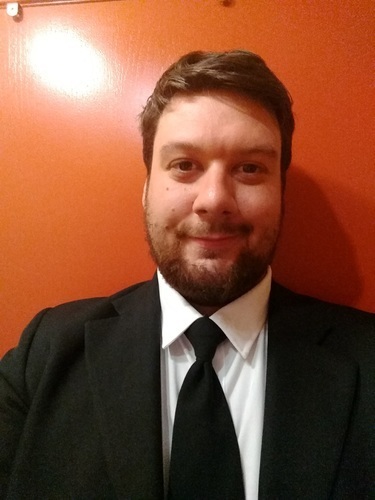 Andrew comes to us from Burton-Upon-Trent a small town in the midlands of England known for being the town of marmite and brewing bass beer (now owned by Coors Molson.)   Blink when you are on the train and you might miss it!

Upon leaving home Andrew moved up North to Sheffield to study at Sheffield Hallam and received his BA in game design, following that he moved on to the beautiful city of York to complete his master in post-production sound for film.

Since graduating his career has taken him in many varied directions including subtitling, teaching, lives events and administration.

Four years ago in 2016 Andrew met the love of his life Leslie, a Canadian living in England and decided to follow her home. In 2019 Andrew was granted permanent residency and they now live together in Victoria where they both have the privilege of working for the Anglican Church (Andrew is also the administrator for St. Peter and Paul in Esquimalt, while Leslie is the youth coordinator for St. George’s Cadboro Bay and program director at St. Luke Cedar Hill.)

During his off-time Andrew enjoys thrifting, going axe throwing, playing board games, spending time at the ocean and exploring the city.